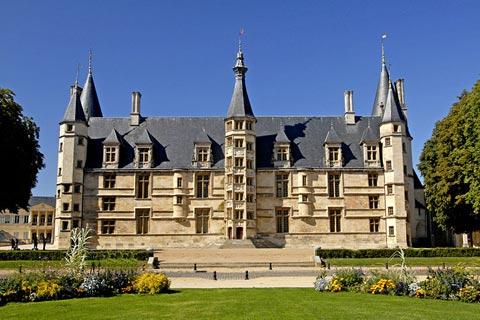 Nevers is just outside the eastern border of the Loire (centre) region in the Nievre department of Burgundy. Although it is therefore not really in the 'Loire Valley' it is included here because (a) it is at least on the banks of the River Loire! (b) if you are visiting the eastern Loire it would make for an interesting excursion.

Today the city is famous for its ceramics and it is also one of the major pilgrimage centres of France because the city has kept the body of Bernadette Soubirous (1844-1879) - after seeing apparitions of the Virgin Mary in 1858 bernadette lived and worked as a nurse in the convent of the Sisters of Charity.

The Old Town, with its narrow winding streets, is full of many buildings and palaces dating from the 17th century.

Nevers cathedral: In the centre of the town, the important Nevers Cathedral is dedicated to Saint Cyr and Sainte Julitte and formed by the juxtaposition of two buildings - the cathedral has, in fact, two distinct apses: in the west there are the apse and the transept of an earlier, more ancient Romanesque style church, while the eastern apse and the nave are Gothic style (XIV century). The portal on the south side is of the 15th century, while outside is the massive tower of the sixteenth century. The Cathedral of Saint Cyr is certainly one of the most important Gothic monuments of the city. Although it lacks a consistent style it is still very powerful in appearance, both outside and inside, and particularly impressive for its size, over 100 metres long, 30 metres in width and with a height of over 50 metres. In the Romanesque apse of Saint Julitte there are some primitive pillars, and the central nave is of perfect Gothic style. Outside the cathedral, admire the beautiful three-light windows and the decorated capitals - the external view is most impressive on the side of the apse and the south façade.

Church of Saint Pierre: There are numerous 17th century churches in Nevers, among them the Church of Saint Pierre, built by Jesuits in 1612, with a Greek cross plan and a façade on two tiers. On the bottom level there are four Doric pillars, supporting a magnificent shrine, inscribed with the stories of the Passion of Christ. Above the central door is a decorative wreath held by a cherub, and two niches between the pillars contain statues of the Virgin and St. John. The upper part of the facade consists of two Ionic pillars, which can be seen inside, where you can admire an altarpiece of the seventeenth century depicting the apparition of the Virgin and Child with a knight (believed to be Saint Luigi Gonzaga).

Continuing your tour, although Nevers is is not very rich in old civil buildings you should certainly visit the Ducal Palace, now an administrative building and the seat of the Ceramics Museum. At the end of the sixteenth century, the art of pottery replaced the goldsmith’s art, and Nevers acquired an international reputation in this field. The introduction of ceramics work was due to the Italian Louis de Gonzaga (1565-1595).

The visit can proceed to the Porte du Croux, a bastion with square base and corner towers. The defence system of the Porte du Cloux was completed between 1417 and 1419 and it is one of the testimonies of the ancient fortifications of the city. Inside we can admire a collection of sculptures and Roman antiquities - among the most prestigious pieces are an angel's head in painted stone of the 13th century; a torso of an adolescent in Greek marble, of the school of Praxiteles (4th century BC); and another male statue in Greek marble dating from the 3rd century BC.

With regard to military architecture, Nevers is a real jewel. The city was protected in the Middle Ages by walls that made it virtually impregnable, as proved by the unsuccessful siege that it underwent in 1617. The boundary wall was developed until the seventeenth century, starting from a route planned by Pierre de Courtenay in the 12th century. To appreciate the strength of its fortifications, reinforced by strong towers, walk to Rue de Loire. The visit in the old town can end with the 18th century Arc de Triomphe, erected to commemorate the victory in the Battle of Fontenoy (1745). 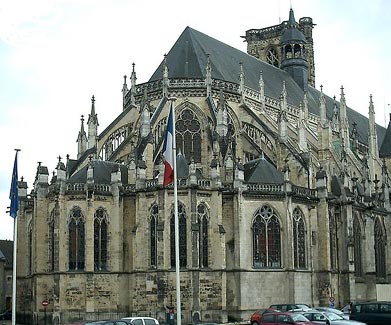 Many historians of Nevers in past centuries argued that the city existed before the arrival of the Romans in Gaul, mainly because they identified it with the city of “Noviodunum Haeduorum", mentioned by Julius Caesar (100-44 BC). However it is now generally considered that the evidence linking the two towns is less than convincing - until further evidence emerges this ancient history of Nevers remains very uncertain.

Turning to certain things, towards the middle of the 5th century Nevers was occupied by the Burgundians, and then, in the sixth century, by the Carolingians with Clovis and his descendants. In the sixth century, the city seems to have been of some importance, since it became a bishopric, with the construction of a cathedral dedicated to Saints Gervasio and Protasio. Under the Carolingians (715-787) the convent of St. Martin was built, and Pepin the Short (714-768) built the first church of St. Pierre.

The construction of religious buildings continued throughout the ninth century, but later suffered a breakdown due to invasions of the Hungarians and Normans, who put in serious crisis the city's development. However, it had a period of great prosperity under the rule of Count Guillaume (1040-1100). In this period there was a great momentum in the reconstruction of old buildings with the new style. In the twelfth century, under the domain of Pierre de Coutenay (1184-1199), Nevers became an autonomous municipality with a rich and enterprising bourgeoisie devoted to trade.In the thirteenth century, the city was enriched by new buildings in the Gothic style.

In modern times the city was ruled by the Dukes of Burgundy and Gonzaga. Carlo III Gonzaga (1629-1665) then sold the Duchy to Cardinal Mazarin in 1659, and the duchy passed to the state in the late eighteenth century.

Note: photos of Palais Ducal and Nevers Cathedral are copyright