The Chateau d'Angers is situated in the centre of the town of Angers in the Loire Valley. It is home to the magnificent Apocalypse Tapestry.

The Chateau d'Angers is very different to the majority of the chateaux in the Loire valley. It is a strong, defensive medieval castle as opposed to the residential chateaux often with white walls and many spires common to the Loire Valley.

The Chateau d'Angers is one of the best conserved medieval castles in France. It is a very large structure, built entirely of rock with 650 meters of walls with 17 towers each 18 meters in diameter and about 40 meters in height. The fortress was entered through two gates, dominated by impregnable towers and equipped with loopholes that could easily repel possible attackers. 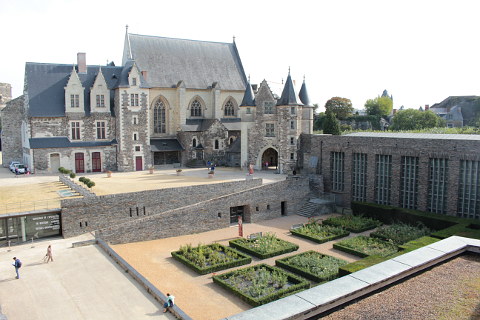 When you enter the main gateway through the thick defensive walls the royal residence and chapel are directly ahead. Behind these are the seigniorial residence and the Apocalypse Gallery and in the other direction, across some lovely ornamental gardens, is the Governor's lodging.

The royal residence is on three floors. On the fround floor are models of the residence demonstrating the changes from the 9th to the 18th century. Above are the rooms of King René and the Duchess.

The chapel was built in the beginning of the 15th century and has Angevin vaulting and a private heated oratory.

The seigniorial residence dates to the 14th and 15th century. It is entered by a charming fortified gateway with conical roofs and has a small formaly planted courtyard. Next to this is a new building built to house the highlight of your visit to Angers castle - the amazing Apocalypse tapestry.

The Apocalypse tapestry is 100 meters long and is the oldest existing tapestry of this size. It was commissioned by Louis I, Duke of Anjou who was the brother of King Charles V,  in 1375 and took seven years to make. The design is by Jean de Bruges who was painter to the king. It was originally made up of six tapestries of 6 by 23 meters. 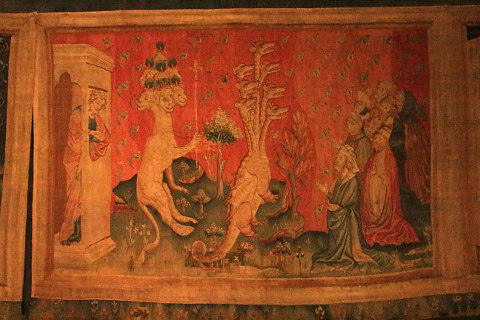 The ‘Tenture de l'Apocalypse’ (the Apocalypse tapestry) illustrates the first book of the Apocalypse. With great realism, the tapestry tells the story of the Apocalypse from creation to the day of Judgement according to the 'Book of Revelations', giving the major events like the arrival of the Four Horsemen of the Apocalypse, the struggle of St. Michael and the dragon with seven heads, and the fall of the city of Babylon.

The tapestry was relocated to Arles when the son of Louis I married Yolanda of Aragon and in 1480 was bequeathed to Angers Cathedral . By the late 18th century it was considered old fashioned and cut into sections. In the mid 19th century is was restored and returned to Angers castle. The purpose built building where it is currently displayed was built in the middle of the 20th century.

The tapestry really is magnificent and merits a trip to Angers and the chateau for the tapestry alone though both the town and chateau are also well worth a visit!

The grounds of the castle include several sections of formally planted courtyard with squares of grass, trimmed hedges and flower borders. There is also a 'hanging garden' with herbs and plants used in the Middle Ages fro dyeing and medicine. There is also a vineyard.

The rocky promontory overlooking the River Maine, which is the location of Angers has been occupied since the Neolithic period.

The Romans were the first to exploit the natural defensive capabilities of Angers by building the first defensive walls at the settlement they called ‘Andegaves’. Many hundreds of years later, in the 9th century, the counts of Anjou constructed fortifications, and other works (ditches) were built during the reign of Philip I (1052-1108) and Philip Augustus (1165-1223), later completed under the reign of St. Louis between 1230 and 1240. During this time the castle was transformed into a more habitable structure of some grandeur.

The 13th century saw the addition of a fortress for royal troops and in the 14th century, Angers castle was the home of the Earls of Anjou, who built elegant and luxurious apartments, with a private chapel (1412).

This decoration and ornamentation of the castle continued under King René (1409-1480), the son of Louis II of Anjou (1377-1417), who built the ‘Châtelet’ and the magnificent garden filled with exotic plants and animals.

In the 16th century during the Wars of Religion the representative of King Henri III had the roofs of the towers levelled to make it a harder target for more modern artillery.

Under the reign of Louis XIV (17th century), the castle became a prison and then during the French Revolution, it played an important military role. During World War II it was severely damaged (1944) by the bombing. The restoration began in 1945.

We were impressed by Angers which is an attractive town with a number of interesting monuments to visit.

Saumur is another attractive town. It has a castle in the centre too, the Chateau de Saumur, but is one of the less interesting of the region.

Map of Chateau d'Angers and places to visit

Places to visit near Chateau d'Angers 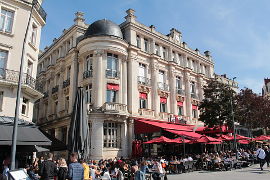 A great chateau and a vibrant town made Angers one of our favourite stops on our Loire Valley trip.

Map of Chateau d'Angers and places to visit